Adult round goby displaying black pigmentation
The round goby is a globally invasive fish, with extensive introduced populations in the Laurentian Great Lakes watershed, the Baltic Sea, and several major European rivers (Kornis et al. 2012).  They are native to the Black and Caspian Seas bordering Europe and Asia, and juveniles of the species were initially transported to the Great Lakes in the ballast water of ships crossing the Atlantic Ocean (Hayden and Miner 2009).  Round gobies rapidly dispersed throughout the Great Lakes during the 1990s and 2000s, although their range remains limited in Lake Superior.  They have subsequently spread to Great Lakes tributaries, the Mississippi River drainage, and several inland lakes. 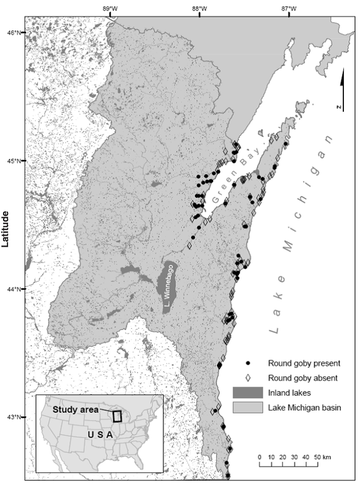 Distribution of round gobies in WI
In Wisconsin, round gobies occur throughout the Lake Michigan coastline and in the area around Duluth/Superior.  Gobies have also spread inland in at least 28 Great Lakes tributary streams in Wisconsin, where they are rapidly dispersing upstream at rates ranging from 0.5 to 2.5 miles per year (Kornis et al. 2012).  Upstream range expansion is likely driven by a combination of short-distance movements related to population growth and long-distance colonization by migrant individuals (Bronnenhuber et al. 2011). Although there are no known cases in Wisconsin, round gobies have been accidentally transported to inland lakes by anglers elsewhere in North America.

Round gobies inhabit a wide range of lake and river habitats, however they are less likely to be found in small, fast-moving streams (Kornis and Vander Zanden 2010) or in areas with low concentrations of  dissolved ions such as Calcium (Baldwin et al. 2012).  Upstream expansion will be mostly limited by dams, but accidental introduction of round gobies to inland lakes and streams has been observed elsewhere in North America and could factor into future spread of round gobies in Wisconsin.  Round goby’s range is expected to increase, as it is estimated that only a fraction of suitable habitat is currently occupied.  Kornis and Vander Zanden (2010) estimated that over 850 miles of stream downstream of dams in Wisconsin was suitable for round goby invasion, with another 4,600 miles of suitable habitat upstream of dams.

Round gobies have become one of the most abundant species in the Great Lakes basin and have dramatically altered their ecology.  Round gobies negatively impact small native fish species such as darters and sculpins (Janssen and Jude 2001; Lauer et al. 2004), reduce availability of bottom-dwelling invertebrates that serve as important forage for other species (Lederer et al. 2008), and consuming the eggs and larvae of important native sport fish including smallmouth bass, lake trout, walleye, and lake sturgeon (Kornis et al. 2012).  Round gobies have also been implicated in transferring botulism to shorebirds (Yule et al. 2006).  Conversely, round gobies have become an important source of prey for several native species, and transfer energy from invasive zebra and quagga mussels to higher levels of the food web. 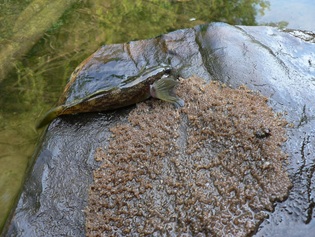 Adult round goby with overturned nest
Recent research at UW-Madison has focused on round goby’s recent invasion of Great Lakes tributaries.  One study found that round gobies are rapidly increasing in abundance in streams, with over 10-fold increases over four years (Kornis et al. 2013).  Although abundances of native species were not affected over this same period, experiments have shown that native fishes have reduced growth rates when round gobies are present at low densities (Kornis et al. in press).  These results suggest that native fish populations may be resilient to round goby invasion despite competition with round gobies, but also raises concern that impacts in streams may increase if round goby abundance continues to rise.

Lauer, T. E., Allen, P. H. and McComish, T. S. (2004). Changes in mottled sculpin and Johnny darter trawl catches after the appearance of round gobies in the Indiana water of Lake Michigan. Transactions of the American Fisheries Society 133:185–189.

Lederer, A. M., Janssen, J., Reed, T. and Wolf, A. 2008. Impacts of the introduced round goby (Apollonia melanostoma) on Dreissenids (Dreissena polymorpha and bugensis) and on macroinvertebrate community between 2003 and 2006 in the littoral zone of Green Bay, Lake Michigan. Journal of Great Lakes Research 34:L690–697.