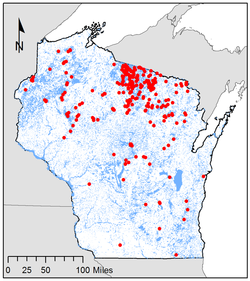 This crayfish species is native to streams of the Ohio River basin (Ohio, Kentucky, Indiana, and Tennessee), and since the 1960s has spread across large parts of North America. In Wisconsin, they occupy a broad range of lakes and streams throughout the state. Rusty crayfish were widely used as live bait prior to being banned in 1983, and thus bait bucket release was a major vector of introductions. Capelli and Magnuson (1983) found that rusty crayfish in Wisconsin's northern highlands lake district colonized areas close to major roads and highly developed lakeshores, indicating the importance of humans in its transport. Once in a watershed, rusty crayfish spread through interconnected waterways, though dispersal is slow relative to many other invaders. For example, it took over 20 years for rusty crayfish to spread around the entire shoreline of Trout Lake, a 3864 acre lake in Vilas County, Wisconsin (Wilson and others 2004). Nevertheless, comparison of survey data through time indicates rapid expansion across the state. Comparison of pre-1980 and 2004-06 survey data reveals expansion from 3% to over 50% of sites sampled. 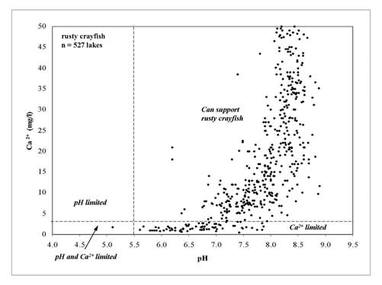 What factors might limit the future distribution of rusty crayfish in Wisconsin? Rusty crayfish do not survive in waters with dissolved Ca2+ concentrations under 2-3 mg/l (Capelli and Magnuson 1983). In Wisconsin, relatively few aquatic systems fall below this level, indicating little potential to limit rusty crayfish distributions. Rusty crayfish also have a strong preference for rocky substrate, which could influence their presence and abundance.

Rusty crayfish displace native crayfishes (Capelli 1982), and often reach densities much higher than native counterparts. They are both voracious and omnivorous, foraging opportunistically on aquatic plants, detritus, invertebrates, and fish eggs (Lodge and Hill 1994). Invasive populations of rusty crayfish can negatively affect aquatic macrophytes, benthic macroinvertebrate abundance – particularly snails – and the survival of some fishes such as sunfish (Lepomis spp).  northern lakes (Lodge and others 2004, Wilson and others 2004, McCarthy and others 2006, Roth and others 2007). They can serve as a major diet item for fish such as smallmouth bass, though they quickly become too large for predators. In short, this species has disrupted littoral zones and food chains, and is of growing management concern. Concern is greatest in northern Wisconsin, but based on their rapid expansion during the past decades, this species could be a statewide threat. Perhaps the majority of aquatic ecosystems in Wisconsin are vulnerable to rusty crayfish, though the implications for most regions of the state remain unknown.

Recent work at UW-Madison has aimed to control an invasive population of rusty crayfish and reduce their negative impacts through a combination of intensive trapping and changes in fishing regulations to increase fish predation of rusty crayfish in Sparkling Lake, Vilas County, WI. A side benefit of this project has been many opportunities to eat this invader!

After 8 years of trapping and 4 years of intensive monitoring post-trapping, rusty crayfish were reduced to 1% of their former densities, while native crayfish, aquatic macrophytes, snails, and sunfish populations all increased dramatically (Hansen et al 2013b). Analysis of data from Sparkling and nearby Trout Lake suggests that a combination of predation by sunfishes and fluctuations in available habitat due to changing water levels may control rusty crayfish abundance (Hansen et al. 2013a). Future monitoring will determine if fish predation continues to control rusty crayfish in Sparkling lake, or if the system will revert to high crayfish densities.