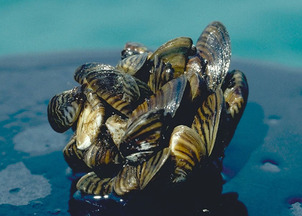 Dreissenid mussels (a group that includes zebra and quagga mussels) were first discovered in the Great Lakes in 1988 and quickly spread throughout the commercial shipping waterways of the Mississippi River and the Laurentian Great Lakes. Since then, recreational boaters and anglers have spread zebra mussel to many inland lakes in the upper Midwest, and most recently, to the western U.S.

Though zebra mussels have spread to over 80 lakes in Wisconsin, in fact, many lakes are incapable of supporting this species. Which lakes provide suitable habitat? And which ones are incapable of supporting zebra mussels? We recently estimated zebra mussel suitability for ~ 13,000 Wisconsin lakes. Lakes were classified as suitable, borderline, or unsuitable based on measured or estimated dissolved calcium concentrations (Papes et al. 2011). 14% of lakes were classified as suitable: suitable lakes were concentrated in the southern portion of the state, though some suitable lakes were found in northern Wisconsin as well. Lake suitability for zebra mussels and other species is available on our invasive species mapping tool. 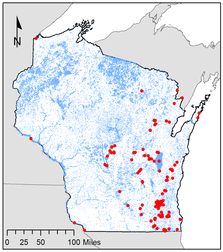 Zebra mussels invasions are cause for serious concern. They have caused millions of dollars of economic losses, declines of native species, and have dramatically altered aquatic ecosystems. Zebra mussels efficiently remove phytoplankton (free-floating algae) from the water column, while simultaneously excreting large amounts of nutrients and organic matter, which promotes the overgrowth of periphyton (bottom-growing algae). We have recently synthesized all of the available data on zebra mussel impacts (Higgins and Vander Zanden 2010). The study found that zebra mussels cause a roughly 50% decline in the open water (pelagic) food chain and a 2-10x increase in the entire lake bottom (benthic) food chain. In other words, the effects of zebra mussels reverberate through the entire lake ecosystem.